General:From time to time the FGI receives questions regarding our collection interests. The questions are sent by our members but as well non-members are searching for our help. As far as such questions are of general interest we will publish the questions on this site.
All visitors of this site are invited to contribute with their input to find answers. You may use our contact form or you may contact a member of the board directly to send your input. Answers that seem to be helpful will be published here.
Answers and discussion contributions (besides really private and confidential information) always should run on this platform to keep all members informed and involved.
Questions & answers will be published in the next Indien-Report for documentation and thereafter will be moved to the archive if of a certain relevance.

The archive contains the older, already discussed questions and their answers. The texts are sorted according to countries and topics. 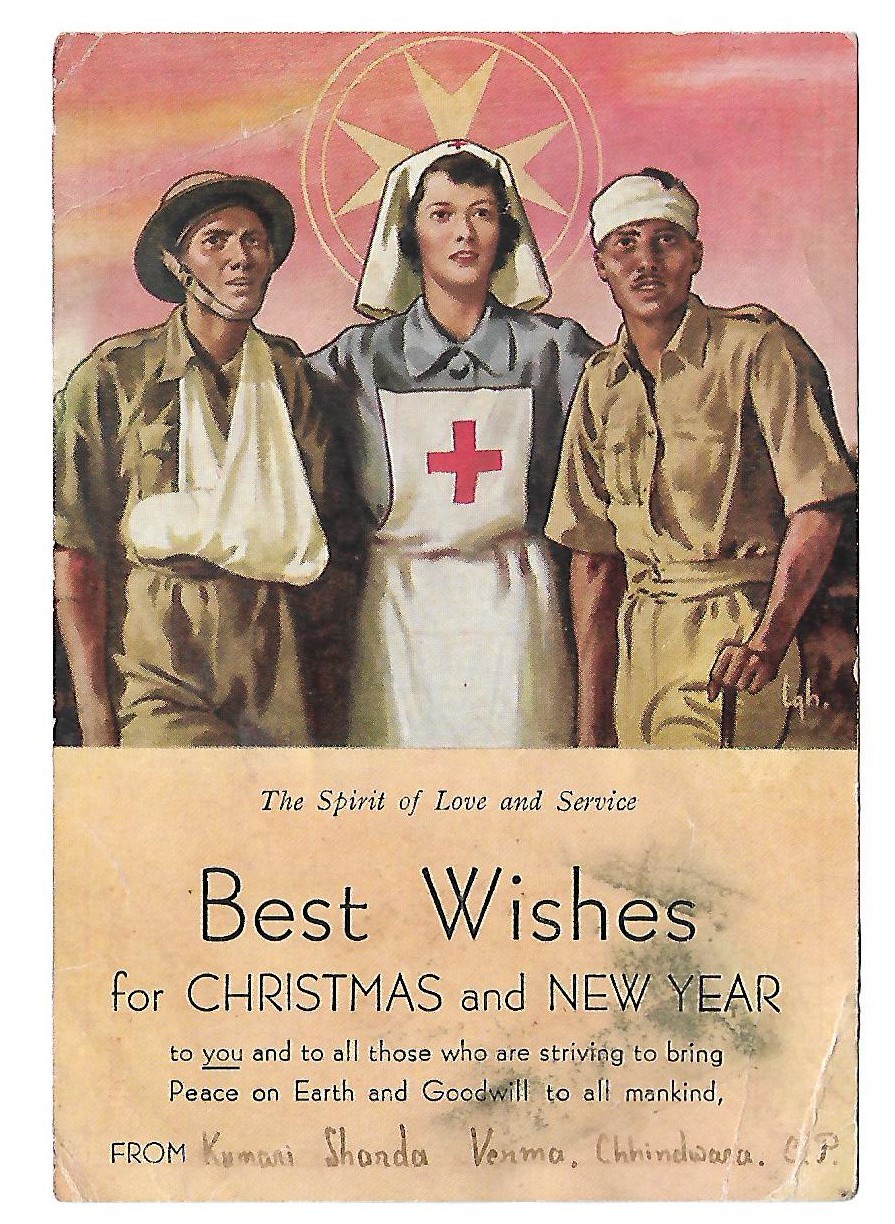 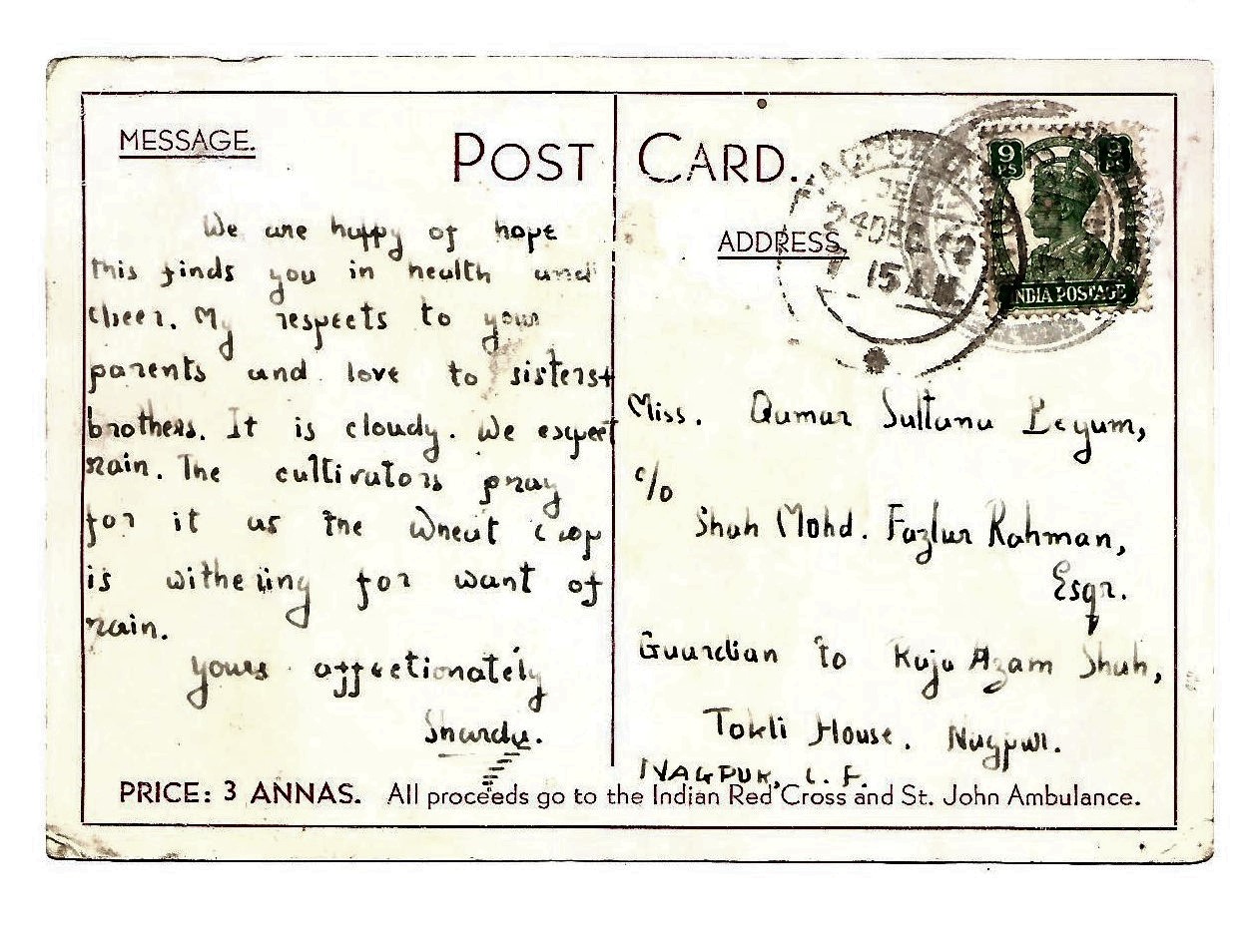 01.02.2021: Our member Zahid Islam from Karachi shows a greeting postcard and has the following question:
"Was this an unauthorized issue just to generate funds for the Indian Red Cross in 1942?"
This postcard has the receiving date-stamp of Nagpur, 24 December 1942, on a green 9p. postage stamp of King George VI.
Part IV of Postal Stationery of India by Derek Lang & R. Saunders ( ISC, UK 1984) has the following note: "There were limited and apparently unauthorized issues. They have been omitted from this listing as being 'philatelically contrived'" 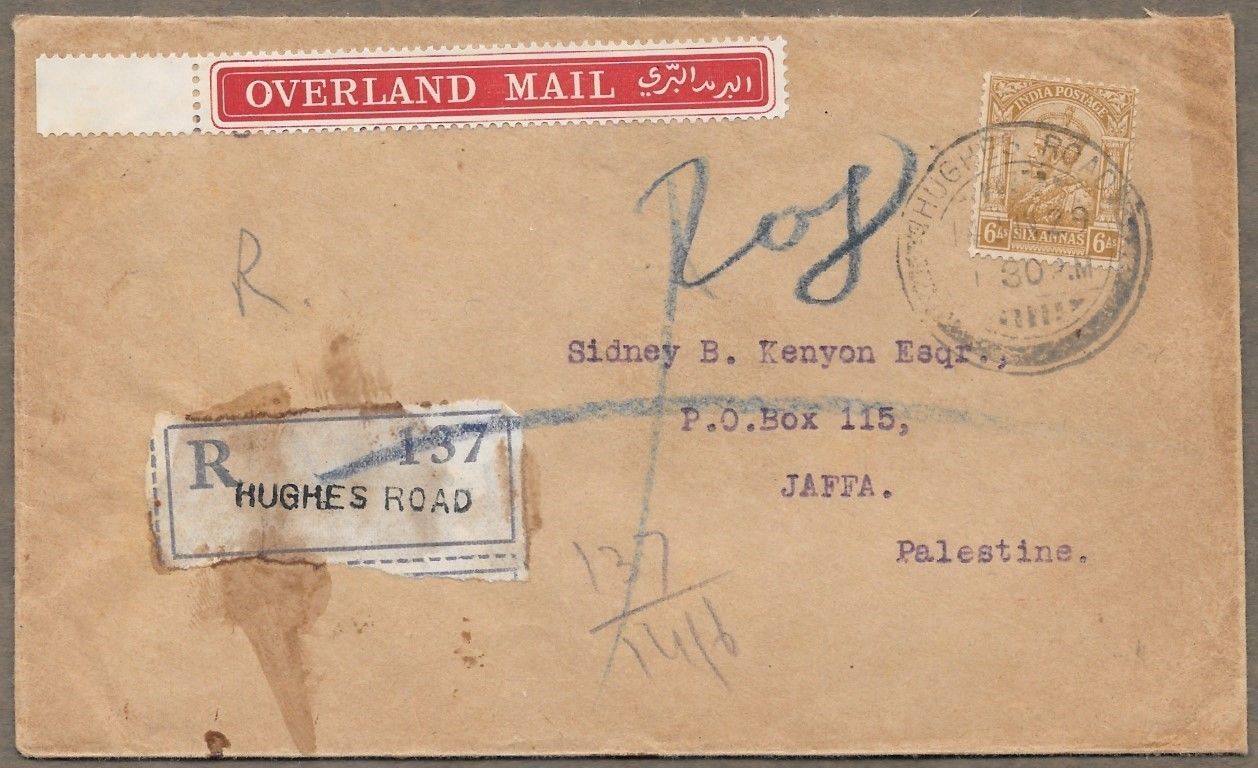 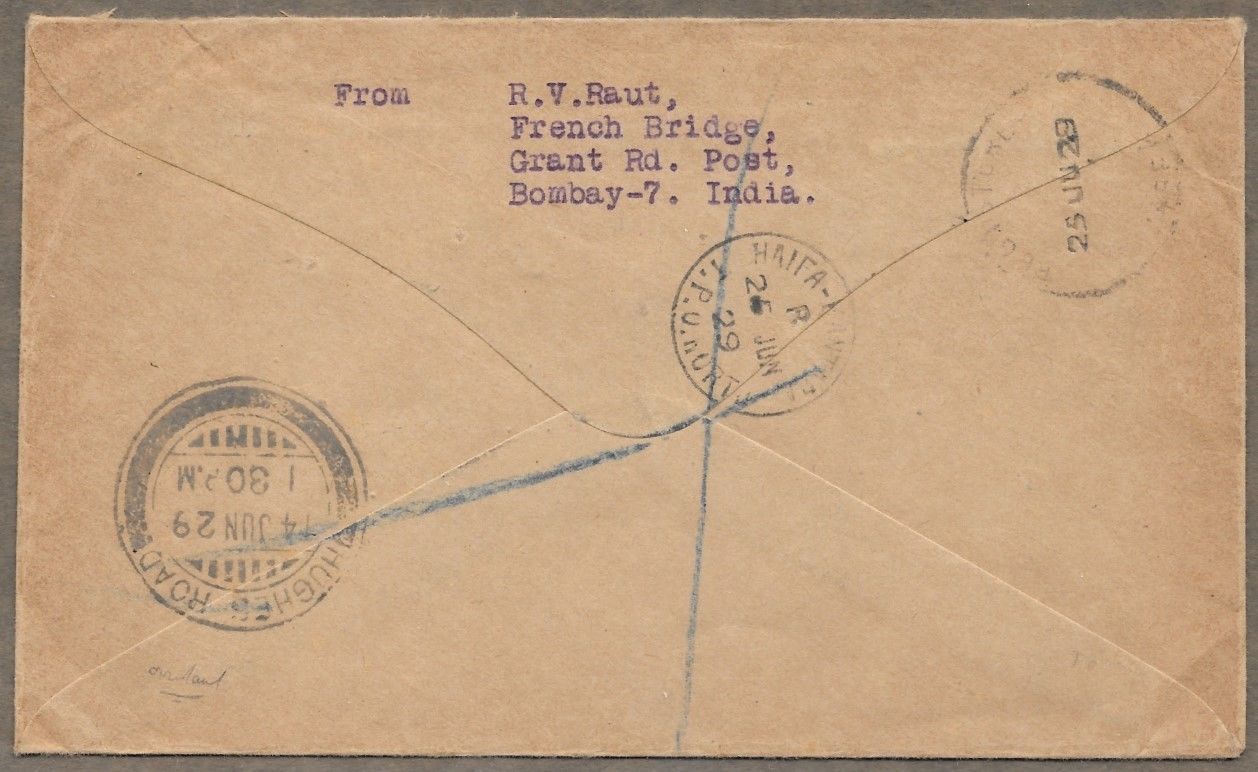 11.02.2018: Our member Rainer Fuchs shows a letter from Bombay to Haifa and has the following question:
"How was this letter transmitted?
It is a registered letter from von Bombay / Hughes Road sent 14. June 1929 to Jaffa/Palestine. Beneath the transit mark from Haifa (25 June 1929) it shows the arrival postmark Jaffa with the date 25 June 1929 as well. Further it shows the Overland Mail label which were used by the Iraqi Post. Is it possible that this letter went by ship from Bombay to Basrah and there was handed over to the Iraqi Post? The Iraqi Post in Baghdad then gave it to the Overland Mail for Haifa?
The postage of 6 Annas is valid for a registered letter (surface mail); a surcharge for Overland Mail from Baghdad to Haifa was no longer necessary at this time."
On 26-Feb-18 Mr. Fuchs has sent the following addendum: "It looks as if the Palestine postal authority in 1940 has informed the UPU in Bern that the Overland Mail from Iraq to Palestine is still working and can be used for for post transmission from India to Palestine. I would be glad to get a copy of this information."

04.09.2017: Mr. Islam shows us an item from Portuguese-India 1945 with the following comment and question: "An envelope originated by Messrs. Volkart Brothers and mailed from Marmagoa, Portuguese India, to London on 22 July 1945 towards the fag end of World War II. Incidentally, Volkart Brothers was a Swiss firm which had branches in all major cities of British India. The cover has some interesting stamps affixed on the reverse side, such as, 1 Rupia Portuguese India depicting Vasco da Gama's Flagship, a pair of 2 1/2 tgs., a single 3 1/2 value, and a pair of 4 1/2 tgs., Plane over Globe issues, inscribed 'Correios Telegrafos Estado Da India'. On the front is a handwritten inscription 'Karachi - Durban' although the cover was passed by an Examiner in Bombay DHC /2. Why was the envelope routed through Durban? As far as I know, this airmail route also known as 'the Horseshoe Route' had come into effect for British commercial mail after the fall of Singapore, and was mostly used between 1942 and 1944. The hub was Lagos, Nigeria, from where PanAm would carry mail to Miami, Florida, in the United States. Wasn't this too circuitous a route for an airmail letter from Bombay (nearest city to Goa) to London in 1945?" 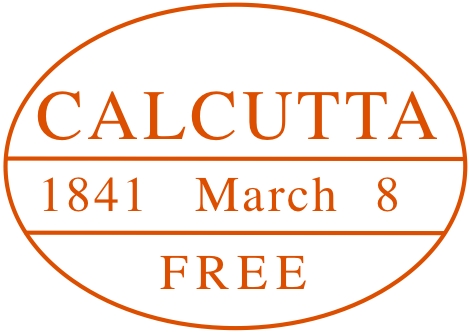 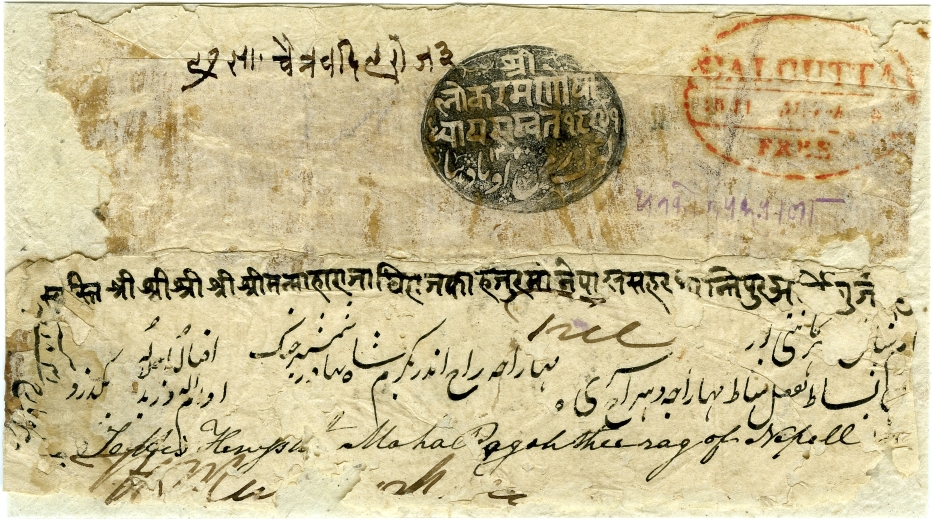 09.08.2017: Mr. Bornmann shows us an item regarding Nepal and has the following question: "This letter from Calcutta addressed to King Rajendra in Kathmandu, Nepal shows a CALCUTTA FREE-mark. Who can give any information regarding this marking?"

11.MAY.2017: Mr. Zahid Islam has supplied these noticeable left-shift of the black printing of the UPU issue 1949 from Bahawalpur. He never has seen any literature or notice describing this flaw. Who can give some details or can show examples?

Comment by J. Wrede: In my stock I can define horizontal shiftings up t o 3 mm for these stamps. However the item shown here has an extreme left-shift. Comparing the shown item with my item with the maximum right-shift gives a difference of more than 7 mm.
It should be mentioned that vertical shifting can be observed as well. Items with the black print touching or even overlapping the upper or lower letters can be found. 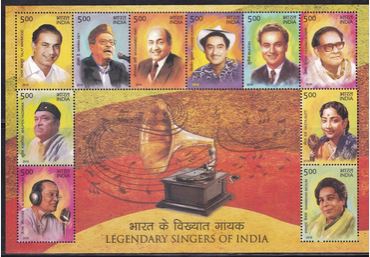 08.FEB.2017: Mr. Becker (a collector of unissued stamps whom we had helped earlier) has sent us the following question:
"The shown miniature sheet and ten single stamps Legendary Singers of India have been issued on 31.12.16. Interestingly a similar (same?) issue was announced to be issued on 21.05.2016. But the stamps came not into sale. There was rumour that the issue had been withdrawn as 5 of the 10 selected singers had already been honoured by earlier stamp issues. It is said that the already printed stamps had been destroyed.
Comparing the issued stamps with pictures of the non-issued stamps I can not detect any difference. Is it possible that the now published stamps are those printed early in 2016 (the stamps had NOT been destroyed) and there was in fact a delay of several months to issue them?"

Note by the Editor: This is a mysterious issue: The stamps had not been issued in May 2016 but were available a short time after (probably illegal) in the philatelic market. See the extracts (PDF-documents) from two publications BetterPhilatelie and RainbowStampNews as PDF. 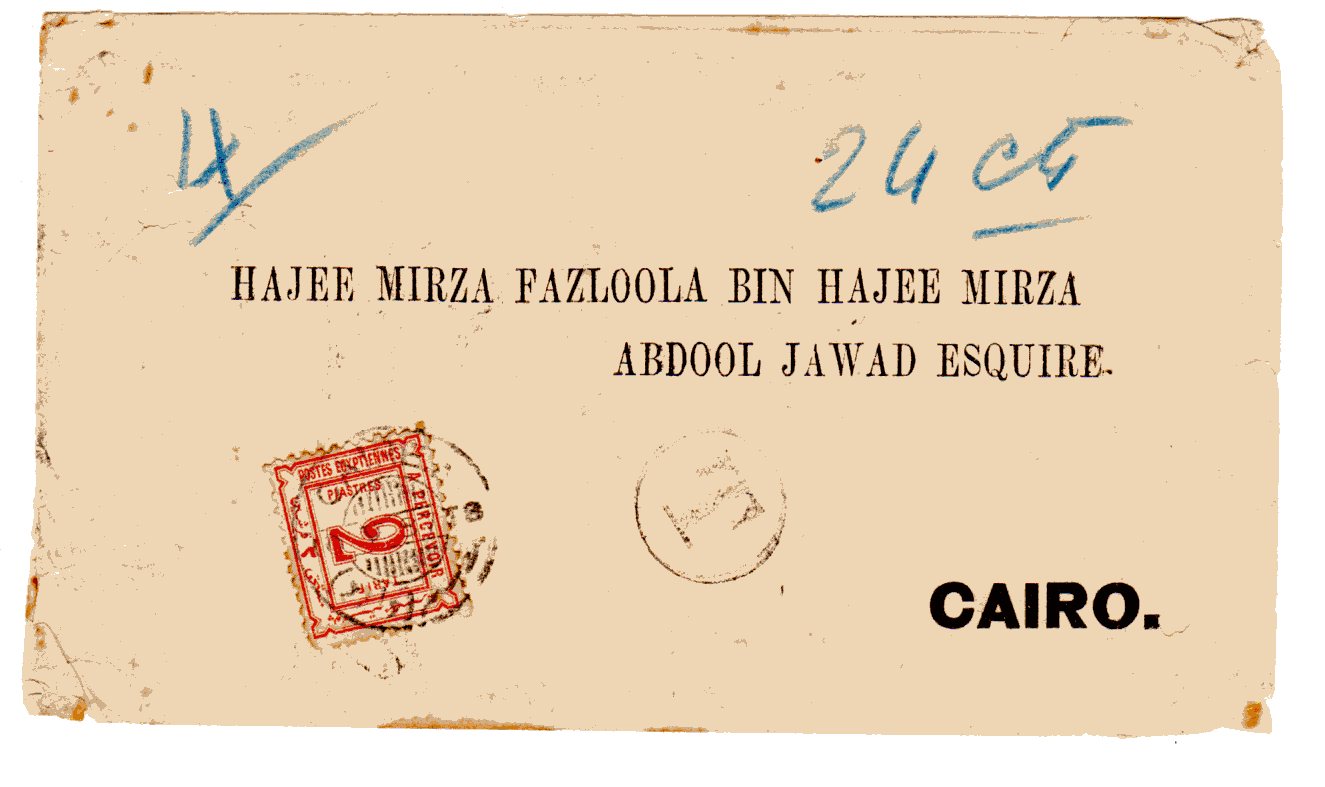 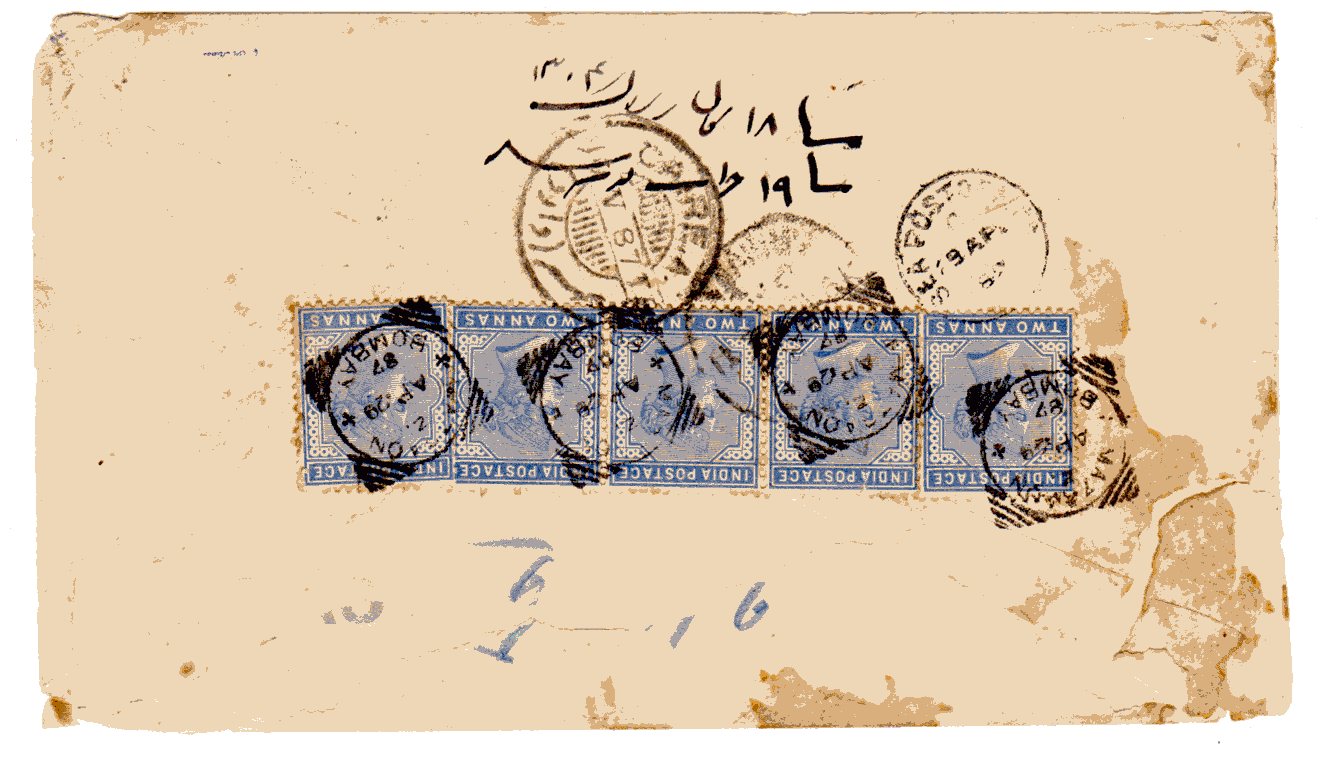 11.02.2017: Mr. Eckstein has sent in a question about a letter from British-India (Bombay) to Egypt (Cairo) dated 2nd April 1887:
"I am just studying postage due of Egypt. I am not an expert of the Indian postage tariffs and thus are asking for your help. I assume that the postage for the 4th weight class was 12 Annas, thus 2 Annas are missing. Converting 2 Annas gives 1 Egyptian Piastre resulting in 2 Egyptian Piastre postage due."
Who can help calculating the postage?
This homepage is maintained by volunteers of the FGI. Over the years the following members have invested their time to maintain the web-site:
Hans Heppner, Christian Sperber, Joachim Wrede. For suggestions, corrections and criticism please contact:kontakt@fg-indien.de